I ate my dinner in the hotel’s Gaststübli with the kind of enthusiasm that only a day’s walk in the mountains can inspire. Rich local cheeses, a broth flecked with small dumplings, and an aromatic loaf of bread comprised a filling, if simple, meal. All washed down with a bottle of Melser Federweiss, a locally produced white.

Joschi sat on the floor at my feet, his head resting between outstretched paws in that particular way that dogs do. From time to time, as the man and the woman busied themselves in the kitchen, Joschi would enjoy a clandestine bit of cheese that miraculously fell from above.

I wasn’t ready for him to go.

Joschi’s guardian arrived promptly at 7. He was mess of a man, wild, unkempt, and disheveled. When he entered the room, Joschi leaped from his spot on the floor and ran to him. The man knelt down to embrace his dog, a poignant and warming reunion which I resented very much.

The dog man sat down at the table next to mine, and the hotel man soon joined him. As they spoke to each other in their own particular, guttural way, I glanced down at Joschi.

Taking the last sip of my wine, the woman approached me.

“Are you ready for another bottle?” she asked.

“But the man has bought you a second,” she said.

At this, I looked over at him. He glanced back at me, smiled briefly, and patted his dog on the head. 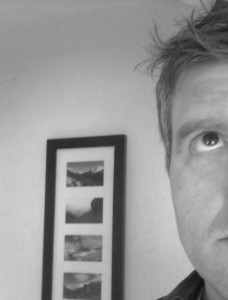