Shit I thought up

He seemed to understand exactly where I was going. And he was quite resolute that he should go there as well. I hadn’t expected to make friends so early on, but it became clear that my first companion would take the form of a solitary and apparently self-sufficient German Shepherd.

I was near the Liechtenstein border, beginning a westward trek across Switzerland that would carry me from the verdant Rhine valley, over the icy crest of the Alps, to the sunny vineyards lining Lake Geneva. The path initially paralleled train tracks, a chain link fence forming a tenuous barrier between the rights of way of the walker and of the Swiss Federal Railways. Immaculate houses lined up opposite the rail line, their window boxes groaning under the weight of crimson geraniums. Only a handsome collection of spotless BMWs betrayed the clichéd quaintness of the scene.

Half an hour in, the marked path left town, turned abruptly to the west, and began to climb in earnest, weaving in and out of forest as it ascended the hillside. Periodic waymarks deposited me at neatly arranged stacks of wood next to a minor paved road, and I considered the snowbound huts whose suitability as shelter would depend upon them in just a few weeks’ time. A flawless blue sky, the sparkle of crystal dew on lush grass, and the glancing of sunlight off distant summits all promised a magnificent day ahead and inspired that feeling of limitless possibility that accompanies the first day spent in an unfamiliar place. It was a splendid day to be walking in the mountains.

He appeared abruptly. Rounding a curve, there he sat, right in the road, a beaming mass of brown and black fur. Not having encountered a single vehicle since beginning the climb, I had little reason to worry for his safety. As I approached, he retreated to the edge of the pavement and eyed me with caution. I paused. Shiny tags dangled from his collar, and a lustrous coat and healthy build suggested that he was far from neglected. His presence conferred the kind of confused aspect one generally observes in supermarket children who have temporarily misplaced their parents.

“You’re fine, I’m just on my way to Weisstannen,” I said, realizing, of course, that dogs don’t generally enjoy faculties of speech.  But in polyglot Switzerland I had reason to hope.

I turned and walked ahead so as not to corner him, and as I made my way uphill, he ventured back onto the road and followed. I slowed my pace, allowing him to catch up. As he gained my stride, I stopped and knelt down. He looked at me and allowed me to touch the top of his head. I petted his auburn coat and took hold of his tags.

I’ve got a story, he seemed to say. And if you don’t mind, I’d like to be part of yours for a while. 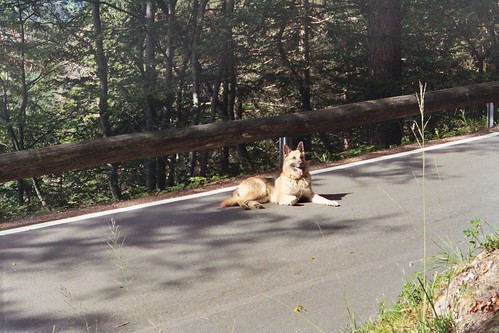